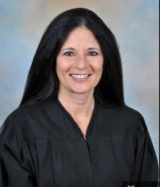 Giuseppina Miranda was appointed as judge to the county bench in November 2013.  She is currently assigned to the civil division.  Prior to her appointment as judge, she was a General Magistrate for the 17th Judicial Circuit Family Division.  Before becoming a magistrate, she managed her own law firm as a sole practitioner.  Prior to that, Judge Miranda was an Assistant State Attorney for five years. Judge Miranda received her law degree in 1999 from Nova Southeastern University Shepard Board College of Law.  She graduated magna cum laude.  She received her undergraduate degree from the University of Florida in 1993.  Judge Miranda has been a board member of the Broward County Women Lawyers’ Association since 2009.  She has served on the Broward Human Trafficking Coalition as a sub-committee member of STARS (Stop Trafficking and Rescue the Survivors) and also served as a committee member on the statewide Model Courts initiative for Florida’s Dependency Judges/Magistrates. Her volunteer work includes mentoring young adults aging out of the foster care system and the Books and Breakfast program at PACE Center for Girls (in conjunction with BCWLA).  Judge Miranda is currently a PACE Board Member.

FAWL
NAWL.org
The Florida Bar
While we encourage our members to pursue leadership opportunities, Broward County Women Lawyers’ Association is a non-partisan organization that does not endorse candidates who are campaigning for public office.